“Culture” does not explain why Black Caribbean’s are falling behind in school. We need other explanations.

As is often the case, Black twitter descended into “diaspora wars” once again this week. An infamous tweeter posted a Voice news article from 2013 with the headline: “Why are British Africans better in school than Caribbean’s?”. 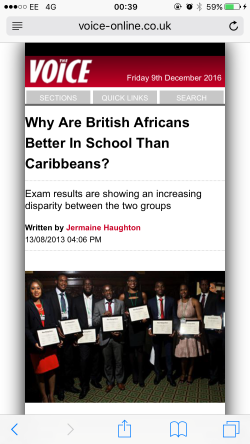 Again, as is often the case, the ensuing conversation lacked nuance and critical analysis on BOTH sides, as emotions were high and two very proud peoples felt like they had to defend their cultures. As someone of mixed heritage (I am half Vincentian and half Cameroonian) I have quite a unique insight into these discussions as the difference between these two cultures speak to the very core of my identity. As a naturally hard to offend and laid back person, it was very interesting to see the way people from these two parts of the world interact with each other.  In between the mudslinging and upset, there were some very suspect points made.

One key response that kept coming up was this idea that within African culture (Africa has no *single* culture but from the demographic who were involved in the discussion, we can presume they mean Anglophone West African culture) education is seen as vitally important. Now I have no qualms with this. My father (Cameroonian) has always taught me the importance of education. He and all is siblings are all degree educated with a few of them holding advanced degrees. The importance of receiving a good education most certainly is emphasised within many African cultures, and this is a value that has travelled over her to British born Africans.

My problem with this assertion, albeit true, is the context within which it was given. In a discussion about why African pupils outperform their Caribbean counterparts, to assert that “Education is important in African culture” seems a bit off. Why is this point made if not to say that it isn’t valued as much in Caribbean culture? In a hypothetical situation where Black Africans were outperforming people of far East Asian descent, would the assertion be made that “Africans care a lot about education?”. I think not. People from the far east have a reputation for being very diligent when it comes to their studies so there would be no need to say how much your own culture values education. Other reasons would be explored to explain the disparity. Within the context of this conversation, the “slack” Caribbean stereotype was being perpetuated.  My mother, who is from the island of St. Vincent in the Eastern Caribbean, is as passionate about education as any West African parent I have ever met. In fact, ALL Caribbean families I have every come across have been absolute task masters when it comes to their child’s education. Where are these West Indian families that are nonchalant about their children’s schooling? I certainly know of none.

I can already here the responses to this piece “you’re reaching”, “no one ACTUALLY said that”. The point is this; Black Caribbean people are at the bottom of almost every good statistic and at the top of every bad one. The idea that Caribbean culture places any less value on education that the cultures of those with children excelling in schools needs to be done away with. The issue with their below average educational attainment must be analysed systemically if it is to be understood at all.

Diary of an Anxious Black Man.